My boyfriend and I are really into hardcore sex and absolutely love it when it gets extreme. As much as we try to go extreme by ourselves, using our entire bodies by fucking on every centimetre of the house or in any position with any part of our bodies, there are times when we need the help of sex toys.

We have used a lot of homemade extreme toys, but because we usually get it on roughly and wildly they tend to break; this is not only quite a big waste of money but also a big health hazard.

Having considered to slow down the usage of homemade remedies, we settled to buy these extreme toy online – at least we will be sure to keep safe while having a hell of fun when having sex. They have actually been proven (by our personal experience) to work much better than the random things we used before. Although we have ended up buying hundreds of toys for every situation, which can range from huge dildoes for my pleasure to harnesses that ease his penetration on me and maximises the pleasure on both of us. There are also quite a lot of bondage equipment that have been specifically designed and tested for this kind of use.

So honestly buying these online turned out to be a pretty good investment to keep our extreme sex fun. And most of all, without having to think about doing some long term damage to ourselves and our belongings.

Love Hardcores? Maybe This Guide is for YOU! 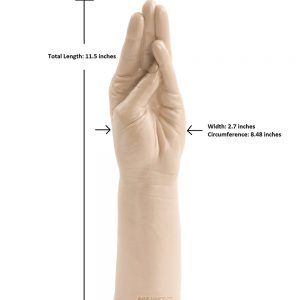 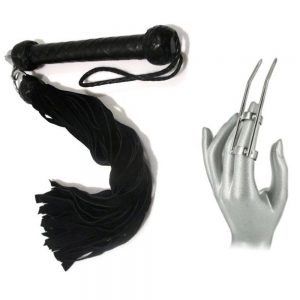 The cat claw skin scratcher  is well made. I’ve only used it once and was pretty leary of it since we haven’t really used it before. So I can simply say, use with caution. If you’re not sure about it, don’t use it at all. Pleasure/pain is one thing, physically harming another person is another.

This thing overall is pretty good value for money. You could troll the local sex shops and not find anything coming close to it. Well made, handles great and also sounds great too. Being handcuffed with blindfolds on, just at the mercy of your partner then you hear that tell tale thwack. That moment where it barely touches your skin. It IS BLISS. 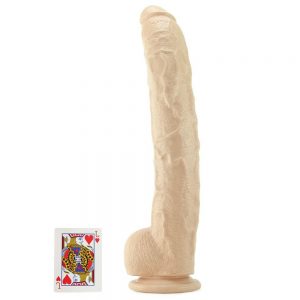 This thing is simply unforgiving. Hence the reason why I will categorically state that this isn’t for everybody. The rubber is pretty hard so if you’re unprepared it could leave to soreness (unless you’re into that kind of thing) But damn doesn’t it feel so satisfying. I walked funny a day later. The rubber suction cup could just stick to everything. shower walls, the table, the kitchen chair, even the kitchen wall, there wasn’t a spot where it couldn’t be mounted. This thing just completely owned me. I was completely cock drunk that the pain and pleasure just became a ball of feelings. What can I say. This thing is a religious experience for me. For others this might be just a dick from hell. So adjust expectations accordingly. 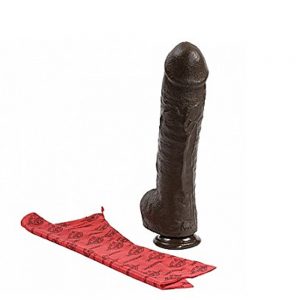 The texture feels real and extremely satisfying. The thin veneer of softness on the surface really feels fantastic. It’s not so stiff that it feels like you’re poking yourself with a baseball bat (though there is a time and place for baseball bats) I just love squeezing it down there while I pull out. The sensation of it all getting me really wet that soon enough, I never really need lube. 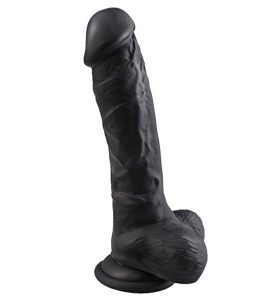 One day though, my boyfriend found out i had this, and we had an argument about it, especially about me not being able to wait a couple of days when he is away. The debate ended pretty quickly that I bought it because it was similar to his: he burst out laughing and I guess I must have given him a huge ego-boost.

Every girl needs her personal toy which she can play with when the boyfriend is away for a long time. I tend to miss him and the extreme sex we have so much when he is away that i searched far and wide for a toy cock that was similar to his. This particular one was the closest i have found: The toy is just a little bit longer, but it works perfectly fine. Because of its huge size, i consider this to be the extreme way of masturbating. I use it in whatever position i want and it can even vibrate. My orgasms are guaranteed with this big boy. 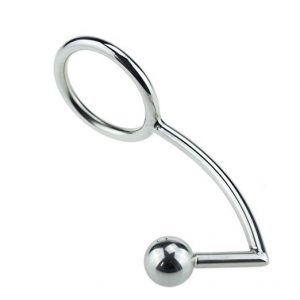 Seeing a hook of this size would seem to be possible only in movies, but because of it – having one in the bedroom makes it all the more kinkier. This hook is designed to be used anally, and it has been granted a pleasure-giving sphere on top, rather than the flesh tearing and impaling sharp tip it has in horror movies.

The kinky shape has its use, as it makes it easier to command around, it being closer to your body.

I love using this on myself while my boyfriend rams me from the side. i do not particularly use it wildly as if its the last time my anus gets opened, but rather push it in, out, and around every now and then. Imagine this position and tell me if you don’t want to give it a shot: I am laying on my side, completely balanced as my one leg is firmly on the bed; my other leg is in the air, either leaning against my boyfriend’s chest or held by him. He is thrusting his boner in me while he is kneeling and sitting on his heels. My hands being completely free to massage my clit. Now, think that the other hand of mine had the hook in hand, and occasionally expand my anus by simply moving it around.

The stimulus received from being rammed hard vaginally and playing with my self anally always gets me off happily every single time. I also occasionally use this on my boy when we do it missionary. At first he hated it, but after trying it he got to like being stimulated down there too.

All couples will eventually buy a pair of furry handcuffs which are to be used in the kinkiest and most extreme sex games and experiences. Not only they are used when right in the middle of the action – but many times they make up to be the best foreplay toy.

Apart from having them used on myself, i love teasing my boyfriend by tying him on the bed’s board head. After tying him up securely as to prevent him from moving too much, I go into the bathroom to get changed. I usually cosplay at this point and wear one of the outfits from my huge selection, with an extremely sexy lingerie set to match. I then slowly strip and dance in front of him while a suitable music plays in the background. I tend to also strip him of his pants and seductively stroke him to get him turned on even more. By the time i am in my underwear, he is so hard i could literally jump on his cock as if it were a horse.

We thought using a slight electro-shock during our extreme sex sessions would be a bit too much to ask for, so when we spotted this toy online, we felt obligated to buy it without heeding to the cost and make one of our fantasies come true. This little toy has various stimulation programs which can be selected from the main body. The electrical shocks are then sent to the pads which are designed to transmit it safely on the body. It was rather hard to learn how to use it perfectly and it took us a while to find the right controls for everything.

Apart from its usual sexual functions we have recently found out it works wonders as a massage tool: many times i have had a relaxing treatment on my back and legs before starting to feel aroused and ready for sex. Those times my orgasms are so powerful that i squirt so much it just drips as if it was a faucet.

Sportsheets Under the Bed Restraints 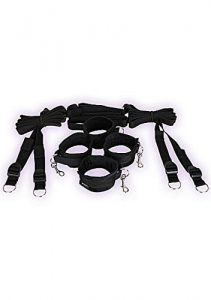 Being tied up and bondaged can be one of the most extreme forms of sexual pleasure if done correctly. This particular harness, which is made of pure leather to add spiciness to the whole situation, is particularly made to be able to tie my wrists onto my back while spreading my legs open in front. It even squishes my boobs, which turns my boyfriend on a lot.

This sex swing is one of the best, especially at this price point. Usually he bonds me up in this harness on the floor. When it is in place, he then goes down between my legs and starts eating me out heavily. As much as I’d want to squirm and extend my arms to hold on to something, I cannot – and this makes the whole deal much more intense. Once I have orgasms once from his voracious pussy-eating method, he lifts me up and places me on the bed, while still wearing the kinky harness. He flips me over in a doggie position and starts teasing my already dripping wet snatch with his schlong. After teasing both himself and me, he goes ahead and rams me hard and fast, continuously. Considering i had just came a while ago, i still feel sensitive down there and his powerful pounding makes me feel a pain. But that pain feels so good at the same time – like a double edged sword.

The definition of extreme sex is not defined – usually people consider everything that’s not in the norm as extreme. The same goes for toys i would suppose. So the extreme my boyfriend and I consider as such may be ordinary to some and maybe an unheard-of-before extreme scandal. We consider our sex extreme because it is much more wild and carefree than a regular love-making session; and the toys are there to make it more spicy and fun – apart from allowing us to have a different game each time to avoid getting bored and falling into the spiral of boring sex.

The most important reasons as to why we use these toys are simple: we both want to have fun with them, and as i stated in the short introduction earlier, we care about our safety. Without a doubt the small electro-stimulator is much safer compared to having an improvised mix of wires plugged into the wall; the leather straps and furry handcuffs are much more delicate on the skin than the old rope we have stored in the garage; and so on. That would be enough of a reason, but there is another one which is a priority – specifically made sex toys are much more kinky to us than the random stuff in the house we used to use.

As for my solo sex toys, i feel much more comfortable using a huge rubber cock when my boyfriend is away rather than cheating on him. He knows this is accepts my toys which are solely for me. I love our extreme sexual experiences and would never trade them for a casual fuck with a softie.