One might ask why, and the answer is pretty straightforward: our vibrators see us as we really are, they know our deepest fantasies, they know exactly what turns us on or not, they have helped us have happy orgasms, and they have given us their everything during harsh times.

Just like in everything, such as jewelry and accessories, a girl wants to score a beautiful piece which goes well with everything and is fantastic by itself; Of course, the cheaper, the better – because by spending less on each individual item will allow you to buy more of each item. The same exact logic is applied when buying our sex toys: Why spend more when you can have a toy which costs much less and offers more features, is more trustworthy, and safer to use in general? Many will agree when i say that some toys are more expensive because they are branded. The brand name is well known, and so it costs more. The whole world works that way nowadays. Fortunately enough, i have been able to compose a nice list of the high quality toys which do not require a big capital to be bought.

would love some new toys for less? check my personal collection 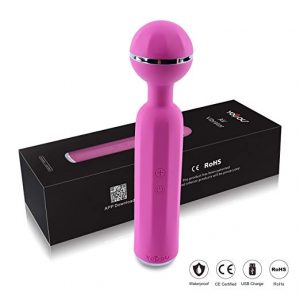 I tend to carry this little baby with me anywhere i go, and because of it being always present, i have used it anywhere i spend time in; Especially at the office. Seeing as we can go to the bathroom as many times as we wish at my company, I tend to use it every couple of days. I just go to the bathroom and lock the door. While people think I am releasing some natural wastes, I am doing something completely different and naughty. I lift my skirt up and sit on the covered bowl. I then spread my legs apart and move my panties out of the way with one of my hands. The other hand will be busy with the little power-packed toy: I will move it around and eventually the vibrating stimulation on my clit will be so strong that I just have to hold my breath to mute any kind of noise coming from my mouth. In five minutes I will have orgasmed silently. Then I’d simply flush the toilet and pretend to wash my hands and apply some perfume before going back to my desk. 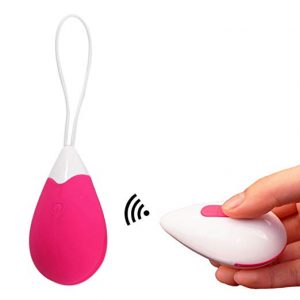 Because they are both small bullets, i have tried various combinations with these as i sat on the bed: My first attempt was to use the round bullet over my clit while making the thinner, rigged bullet enter my pussy. This was awesome, especially when each bullet was set to vibrate at differing intensities. It was like a torture of pleasure. I could not stop moaning and squeaking from the fun i was having. I also tried using the thin bullet to stimulate my anus while the round one remained on my clit as I fingered myself, and that was good but different. Different because I felt much more aroused by have a vibrator halfway up my ass, but the orgasm that followed was less intense compared to having both bullets focus around the areas in front. At one time I even stuffed both of these bullets inside my pussy and left them vibrating inside and used my fingers to massage my clit. It worked pretty well too, but it took me much longer to climax – no matter how hard I tried with my fingers it wouldn’t have the same effect. 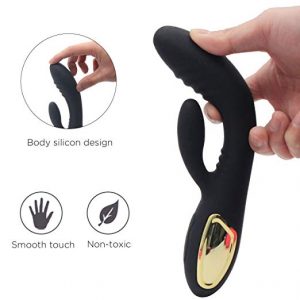 If one is after a very powerful toy, which can provide vibrations and pulsations which can match and even surpass most of the more expensive sex toys out there, and not spend a fortune then this is one of those toys to consider.

Because of its price, which is roughly $8, the design and shape is not very fancy: It looks rather dull to be honest – but this is not to be overlooked. It has various levels of intensity, and i can say that when set on maximum, not many vibrators can compare to it. 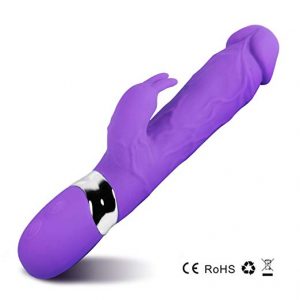 These kinds of toys are known for their great durability and ease of use. After all, you can stick it inside you without it even vibrating – it works well enough that way too. By rotating the handle you can turn on the vibrations, and that is when the magic begins.

A classic dildo calls for a classic pose for a woman, and what’s better than a stash of pillows between your back and the bed’s head board with a light cotton cover caressing your naked body? Nothing, and I find this pose to work perfectly well. Even better if there are just some low lights or candles. After touching my body with hands, focusing on hovering over my neck and sliding down to my boobs and nipples, i reach for my thighs. My sex toy would be there besides. After a short exploration of the vagina i have explored so many times with my hands, the cold metal reaches in between my labia and i can do no more than shiver. As soon as a few rubs will have warmed it to skin temperature, i would let it slowly enter me. It would exit me shortly after and return vibrating, which would make me tighten my walls as a natural reaction. The rest gets more and more intense – and you know where it leads. 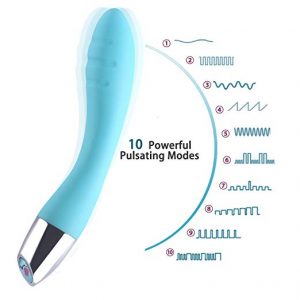 It is quite short, but in exchange it is fully flexible, and those little bumps it has all over its cute body make up for it more than is necessary. It is already slightly curved by itself, as to make the stimulation of the G-spot easier even when staying in a flat position. On its handle lies the magic control panel which hosts seven different vibration intensities and patterns.

Whenever i masturbate with this toy, i can really feel like my whole vagina is being touched – I’d have to guess its because of the little bumps, which are pretty solid themselves and placed at irregular intervals; that is actually a great idea, as i can never memorize where they are, and it appears to be a sweet surprise every single time. The stronger the vibration, the more the little bumps make themselves felt; all the vibrations are set out by each bump at different times: it might be just fractions of a second, but it can definitely be felt in there. This is an excellent toy to be used as a tease for something bigger afterwards – or to be used with a bullet which is going to focus solely on the clit. By itself, the orgasms are great, but i feel there could be more of it as it is a little too short to reach all the way inside.

In conclusion, you may have noticed that the price doesn’t define the quality. Of course, they might be a tad bit less durable, but as long as you don’t over-use them they will do just fine. I only occasionally use toys, and i can safely say that i usually rotate them around. Meaning the same toy gets used 4-5 times a month. None of them have ever been broken from overuse. i did break a few by mistake though. Dropped a couple of them and another one got crunched in my luggage.

Anyway, if you share my same mentality of not wanting to spend so much for something which you will only occasionally use, I am 100% sure you will have found my top cheap vibrators list pretty useful. If not to buy exactly the same ones, at least to know that there are all sorts of products within a price range which can be afforded by everyone.

You have to be careful though. Do a little research before buying something that is so cheap that it sounds too good to be true. I have also seen bullet vibrators on sale at a dollar each: which is honestly a little fishy. Just make sure you order from sources with at least a positive review as to avoid having weird things sent to your home. I’ve read about people buying sex toys and receiving something completely different inside the toy’s box. Also watch out as cheaper toys may mean cheaper materials, which can be pretty irritating to the skin and other sensitive parts, especially if not lubed correctly.

So, we’ve all heard so much about the prostate – and mostly because it is the one of the main organs of men which…