I am not new in the field of vibrators. I have been using a lot of them since I was a teenager and the habit has lived on up to now, with me being almost thirty years old. Out of the many shapes, sizes, and designs I have to say that the rabbit vibrators are the absolute best when it comes to the best orgasms. 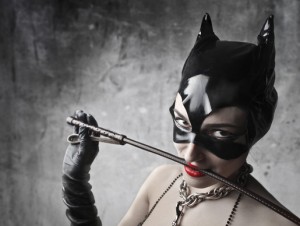 Well, apart from the funny story, if you have not tried these kinds of vibrators I urge you try them right away as they will blow your whole world away while you use them. If you have, then take note of the ones which I rate to be the best of the best – they may turn out to be useful to have in your collection.

The absolute best features of this toy are its numerous vibrating programs which can be used separately or together, or the so called “free floating pleasure pearls”. The whole body of this toy is made from a smooth material.

The greatest satisfaction in using it can be felt from the very intense vibrations this little toy can emit, which are easily adjustable from the handy control panel located on the handle. Because of the free floating pleasure pearls, which are moved around depending on the position you use the toy in, I use this in a plethora of position. For example if i am in a position where i am bent forward, the little pearls will move over and bounce around the place closer to the g-spot – which adds up to the pleasure that the slightly crooked head gives out when pushed against the vaginal wall. Each little bouncing ball is like a shock of pleasure, which all add up in making me orgasm and squirm by myself on the bed. 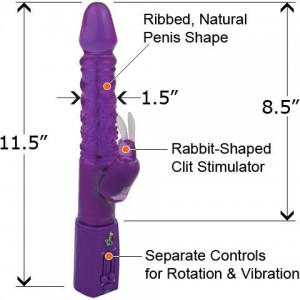 This rabbit sex toy looks very similar to all the others, of course, but features very soft rabbit ears which stimulate and wrap the clit however you want.

The body is made entirely of a solid jelly-like substance that feels a lot better compared to the super stiff ones. It has a vibrating function which can be switched on and adjusted using a handy scrolling wheel on the handle. There are two of them – one controls the penis shaped stick while the other is to control the rabbit head.

On this toy, i particularly love using it while sitting up on a chair and letting my ass slide down to give me easy access to my pussy. Because of its being jelly-like the sex toy is pretty flexible and because of that, i can really feel it is it goes inside me while being forced inside from an unusual position. In this position, i can really feel its top head pushing hard against me from the inside, and each little particular bulge on its body can be felt. Having my legs not fully spread open also helps in this, as by contracting the walls it makes me tighter and more prone to feel everything. I don’t necessarily have to slide it in and out at this point, playing around with the vibrations can usually get me done at this point: it was pleasurable enough when it wasn’t on, so think about it when i turn the pulsations on: it literally makes my moans vibrate too. 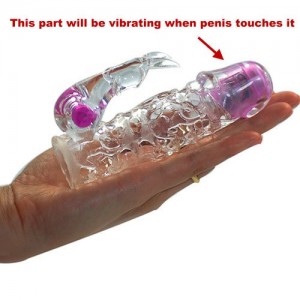 This tiny boy is a life saver especially when i have to be discreet from being away from home. It’s so little that if fits even in the smallest luggage without taking space away from the various outfits and shoes i bring along with me when i go out of town.

It also has a nice system of having only the heads vibrate: There are two bullet-like vibrators which are controlled separately and each is placed on the two heads. I love being in control of this little guy.

Anyway, its body is rigid and transparent, but quite short. It is very rigged and that bring about a lot of pleasant-tickles as i slide it in slowly. I then turn the vibrating head on while its inside me and carry on sliding the phallus in and out. Occasionally i’d tease my clit by switching on the rabbit head and letting her taste it for a few seconds before leaving it. This intense anticipation takes my breath away and prevents me from inhaling new air. The few seconds before the clit is stimulated always make my heart stop; it also seems like the time stops completely.

By carrying on doing these movements i will inevitably have an orgasm. Because it is all supposed be discreet, this process takes a long while, and the truncated breaths help me cover up the happy and releasing orgasm that happens. I then turn off the vibrations and slowly pull it out, clean it thoroughly and hide it back into my luggage. 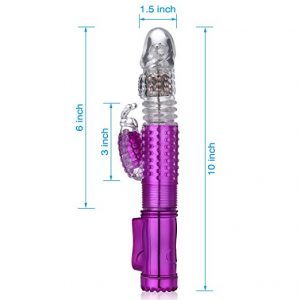 Although it has received a couple of negative reviews, this particular toy advertised so many interesting features i really wanted to try out; so i bought it regardless of the warnings. It was one of the best against-current decisions i have made in my life. My toy worked perfectly and provided me with hours or sexual entertainment which is only fit for gods.

The functions that interest me so much in this toy are its rotating and lengthening: i have always dreamt about having a toy which would do everything on its own, and this is finally it. As i tried it out i wanted to make it special – so i laid comfortable on the bed and started fiddling with the controls before i used it on myself. I watched it as it started vibrating; a few buttons after and there it was, doing magic right in front of my eyes – it was rotating, making its rings and protuberances go around in circles. By pressing another button, it started stretching and shrinking, all the while it was rotating. I could even control the speed of these actions, as well as the twelve vibration intensities.

By then i was already looking at it as if it was my Christmas gift when i was a little girl. I turned it all off and stuck it inside me before turning each function on again. The pleasure i felt from the various movements was indescribable. All i know that i somehow felt like something was moving inside my pussy all by itself, which knew exactly what to do and how to please me. Let me just tell you it was over way too quickly.

This particular rabbit sex toy has a weird shape which is designed to simulate your g-spot tremendously while at the same time stimulating your clit to make her feel like a princess.

I love these kinds of toys made of glass with smooth rings and bulges around it because it gives me complete control at how hard i push them inside of me. What makes this toy special is that the clitoral rabbit vibrates even if it is made of glass.

After inserting the curved stick inside my horny hole, i place the rabbit where it should be and let the vibrations begin. As i stay still for a few minutes, to just enjoy the moment of its first touch, i then reach out for the ring handle on the other edge and start playing with it vigorously. Apart from feeling great inside, the various preset vibration and pulsation programs take me to new heights of pleasure from my clitoris. This toy is perfect for me when i feel somewhat tense as having to move it manually tires me out and forces me to nap or just lay in bed after the moment of magic that it has always provided.

Another great property of the glass body is that it can adjust to the temperature you want it to be. If for example i want it pretty warm, all i have to do is dip in in warm water before using it; if i am after a chilly experience, then i just place it over some ice cubes until it gets to the temperature i want.

Anyhow, I like the fact they called them rabbit sex toys – it makes them sound cuter than they already are. Apart from the shape, I think the saying “screwing like rabbits” adds a nice little pun to it. In this case the rabbit really does screw a lot, and fortunately it won’t bring any little bunnies afterwards.

Presently, as well as in the past, I have found myself to be using sex wedges – mostly because of their convenience. They are…