Having a nice bunch of strap-ons is a definite must in any lesbian girl’s arsenal. Now, it would be weird if one had hundreds of them, but I consider myself to be in the norm, owning about 30 of them.

These are my favorite ones: the ones which I am proud to have in my arsenal of toys when I take a girl home. Of course, they can be also held in my hand when I am alone, and using them has the same effect of any handheld rubber cock out there.

Warning This Could Be Addictin!

This is the ideal tool when you want to please your partner as if you had a dick and please yourself as well in the process.

At first I wasn’t sure about buying it. It doesn’t really look stable at all, and looks like it could fall out anytime. I bought it anyway, and after spending some time alone with it I was satisfied; so I decided to bring it up with my the girlfriend. She was a bit hesitant at first for my same reason: it might slide out in the most important moment, ruining the whole love-making session.

We opted for a position which wouldn’t involve me moving around so much: the cowgirl. After having placed it comfortably inside my vagina, she sat over me and penetrated her own love hole with the longer shaft. As soon as she started bouncing I also felt pleasure because her bouncing made the toy push back and forth inside me too. I eventually had to hold it a bit steady when she went totally wild with her bouncing up and down. After her orgasms we changed position: I was on top now and she was the one laying in bed. As I was about to cum as well, I told her we should try the vibrating bullet that came with it, and so as she turned it on, I just had to ride her softly as the vibrations did most of the job. As I was having my orgasm, I took a look at my ex and she was already having her second one because of the vibrating function. 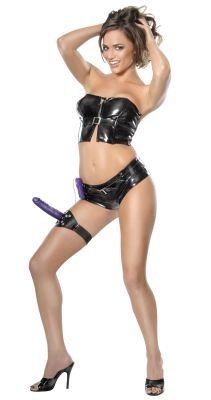 Being able to please my partner from whatever part of my body with a rubber dick has always been a fantasy for me. This particular strap-on was designed to be worn on the thigh (which is honestly pretty useful) but i have managed to make use of its full potential by strapping it on various places on my legs, depending on the position me and my partner decide to have sex in.

One particular position which wouldn’t be possible without this toy is this: i lay with my back on the bed, slightly tilted to one side and raise the leg on the opposite side; my partner then curls her leg around my lower calf which is on the bed. This leaves her hands and mouth free to roam around my sweet pussy and pleasure it the way she wants. This strap on toy is placed on my lower calf, exactly where her pussy is.

The toy has a remote control which allows me to control the intensity of the vibrations as to please my partner with it while at the same time she is eating me out. I also tend to move my leg back and forth as to make her feel the thrusting motion. When we swap places, I feel like i’m in the best spot – because I am getting my pussy dildoed and at the same time eating out my lover’s snatch while directly looking at it from underneath as my legs were tightly wrapped around hers. 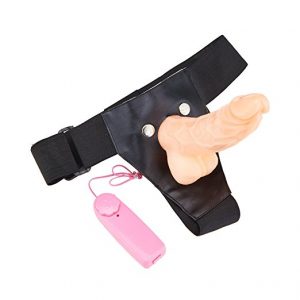 There are times when the pleasure has to be focused on one of the two to get maximum results and a more powerful orgasm. This is the perfect toy that i have found for these occasions.

This strap-on toy satisfies those two needs perfectly. The best position i have experienced with this toy was in missionary. My partner was penetrating me as if she was a man from above. With her hips pushing forward and back in a slow yet confident way; the toy vibrates in me at different points, and as she pushes deep, the clit stimulator reaches me and turns me on more each time. All the while looking at her serious expression as she does her best to make me feel happy, while her nice boobs dangle in front of me. At some point I always stop playing with her nipples and grab whatever is in reach, because the orgasms I experience this way are earth-shattering, and it feels like I really have to hold on to something and hold it with all my strength. 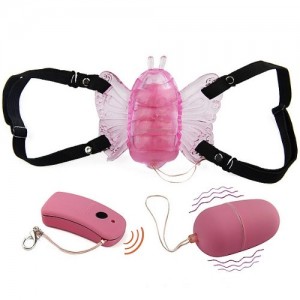 Apart from having strap-ons with huge cocks attached to them, I have also been able to dig up this very discreet vibrator-only toy that can be strapped on top of my pussy.

This is a very useful toy when I want to get really intimate: because it has no parts that are sticking out, my partner has to be very close to me, literally clit to clit. This allows us to play with either our hands or other toys on each other’s pussy. There are endless possibilities with this one.

The most original way of using it was in public. Both me and my partner wore one as we went out clubbing one night. It would seem pretty harmless that way: but we each held the other’s remote control (it’s wireless and can be controlled from a distance). It was so fun using it. At my whim my partner would get a stimulation and her reaction was priceless each time! I have also received a lot of stimulations, and she was laughing her ass off every single time. I wonder if people noticed what we were up to. 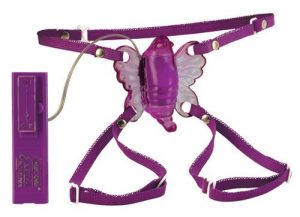 This is a seemingly ordinary sex toy which has a vibrating function with one main exception: the penis is really tiny.

While in men having a mini penis looks bad and is not enough to satisfy women, quite the opposite happens if it is in a toy like this. Because it is so small, it focuses all of the powerful vibrations in that one small area it can reach; it also makes me less tired when thrusting someone – the distance to pull in and out is considerably with this shorty rather than with an insanely long one.

Because of its adjustable strap which can make a really tiny loop when set on minimum, i tried a little playful experiment and it worked wonders. With my partner laying on the bed, with her back fully rested and her legs folded and spread open, i strapped the vibrating mini-penis on my chin. I then went ahead and ate her muffing out voraciously. By moving my jaw up and down or even in a circular motion the chills she received were extraordinary. I could see her thighs getting chicken-skin while i moved my jaw and exhaled warm air on her pussy. Things got even better for her when i went all out and exercised my jaw-tongue coordination. I admit it seemed impossible at first, but by practicing a little I finally was able to move my jaw and tongue, to respectively allow the strapped toy to penetrate her and my tongue to massage her clit.

In the end, strapons are just a way for us lesbians to say that we do appreciate the male organ; and the male way of thrusting it inside us. We like it, otherwise we wouldn’t be making it with that shape. It’s just that we find ourselves much more knowledgeable in regard to our bodies. After all, a woman knows her body more than a man would: so to please a woman, i use use the tools men have using a female’s point of view.

I will spill the beans and say I have occasionally done the dress-up game where I or my partner would dress like a man, with trousers and everything, and when its time to get stripped, the rubber cock is there underneath – being made fun out of at first, but will eventually enter the other’s pussy and cause her so much pleasure that it will make her shudder and squirm while her moans increase in tempo and intensity.