So, we’ve all heard so much about the prostate – and mostly because it is the one of the main organs of men which ends up malfunctioning as we get older. There have been lots of medical improvements which now allow up prostate glands to not give us problems when we age; and lately there have also been lots of medical papers released which confirm the one point which makes me happy: that stimulation and exercise of the prostate actually improves its health and prevents future complications.

I say the one point that makes me happy because, well, having an orgasm while the prostate gland is being stimulated is simply much better than a regular one. Think of it as a super-orgasm for men. Those who have already tried it will know what I’m talking about; and as for those who are willing to try out and try an out-of-this-world experience, you will find this article very useful. I have made a list of the top 5 prostate toys for the current year, 2015, and I hope you will share the pleasure they have given me.

Top 10 Prostate Toys for the Adventurous 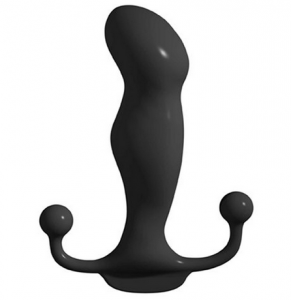 A great prostate stimulator to start off with is the Aneros Progasm Stimulator: it’s very bare-bones to look at, but it features those bumps on its body which really makes it effective.

I do admit it’s actually a bit longer than some of the other prostate toys I have tried, but when I use this one, I can be sure it reaches where it has to. Seeing its big size, the newer users may feel a little intimidated, but trust me when I tell you this: it fits.

Because of the shape of its other end, it is comfortable to wear in any position, from laying down to sitting or even standing. Its girth and length means that it hardly ever slips out (it has never happened to me), and after barely 15-20 minutes after starting to squeeze it inside, the fun begins – and it lasts for hours, or until you can no longer hold your libido and finish up.

If you are more into the automatic toys which don’t require you to do Kegels extensively and non-stop before the pleasure starts, then one of the best prostate stimulators I found is this particular one from Nexus: the Revo2.

When I first saw it, I thought it looked really professional with its classy design; but what intrigued me the most was the side arm with its little studs.

I really tried imagining what it would feel like, and once I finally bought it and gave it a shot, it really exceeded my expectations, it was much more than what I had imagined! With the studded arm stimulating the perineum, the main stimulator is placed inside – and does its magic. It spins while at the same time it vibrates, and it doesn’t take my prostate long before it reaches the point where my whole body feels like melting. You can even adjust it to 2 different rotation speeds and 3 vibrating levels. 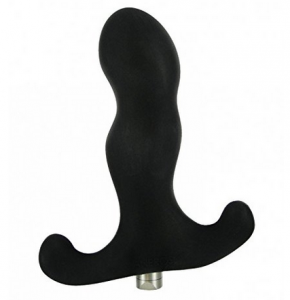 The Aneros Vice is perhaps the most versatile prostate toy I’ve had the pleasure of using this year.Apart from its relatively small size which makes it easy to store and bring around if you travel around (whether only occasionally or frequently) – it can be used with or without the vibrating function turned on.

So, if you want to have a manual session without it vibrating, you are free to do so at any time simply by removing it or never turning it on (and I personally like having it that way every now and then).

While its white color and futuristic design may appeal to some because it makes this prostate toy look innocent and mild, rest assured that it can give you one of the most intense orgasms you will ever feel.

I do admit that it’s quite hard to get used to it, especially because the manual isn’t so clear about which button corresponds to which function – so much that I had to do quite a lot of trial and error sessions to figure out how to use it the right way.

So far, I’ve tried out some of their vibration modes at the 12 different intensities available and have to say that there’s a program for whatever mood you’re in. Just make sure that you keep a close eye on the screen and be prepared to pull the plug out in case you end up putting the strongest settings from the very start. 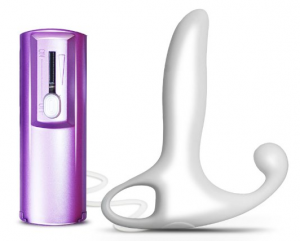 I consider this the little version of the Mangasm prostate stimulator I wrote earlier because of, well, its smaller size and less programs.

It’s very compact and can be taken around with ease, though its smaller size also means that this toy may not be ideal for big people as it may not reach deep enough to reach the prostate; though if like me, you’re average size or smaller – it’ll be just enough. And if you look at the girth, you will see it’s pretty wide.

They toy is battery operated, and has several intensity levels which can be controlled using the scrolling button on its remote control (which is connected to the stimulator by a thin wire). Overall, it’s a great toy, especially for beginners who may be scared off by the much larger toys available out there. I do admit I’d have preferred a color combination which wasn’t so based on white for obvious reasons; but the prostate toy itself is very easy to clean, and so I can’t really complain about that.

Guys if you have been using prostate stimulators for some time already and you are looking for something a little more advanced, this is…